The Golden Altar of Incense 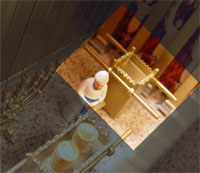 The golden altar of incense, which is not to be confused with the brazen altar, sat in front of the curtain that separated the Holy Place from the Holy of Holies. This altar was smaller than the brazen altar. It was a square with each side measuring 1.5 feet and was 3 feet high. It was made of acacia wood and overlaid with pure gold. Four horns protruded from the four corners of the altar.

God commanded the priests to burn incense on the golden altar every morning and evening, the same time that the daily burnt offerings were made. The incense was to be left burning continually throughout the day and night as a pleasing aroma to the Lord. It was made of an equal part of four precious spices (stacte, onycha, galbanum and frankincense) and was considered holy. God commanded the Israelites not to use the same formula outside the tabernacle to make perfume for their own consumption; otherwise, they were to be cut off from their people (Exodus 30:34-38).

The incense was a symbol of the prayers and intercession of the people going up to God as a sweet fragrance. God wanted His dwelling to be a place where people could approach Him and pray to Him.

The picture of prayers wafting up to heaven like incense is captured in David’s psalm and also in John’s vision in Revelations:

“May my prayer be set before you like incense; may the lifting up of my hands be like the evening sacrifice.” (Psalm 141:2)

The golden altar, furthermore, is a representation of Christ, who is our intercessor before God the Father. During His days on earth, Jesus prayed for the believers. He was like the high priest of the tabernacle, who bore the names of each of the Israelite tribes on his breastplate before God. Just before He was betrayed and sentenced to death, Jesus interceded for His disciples and all believers, asking God to guard them from evil and sanctify them by His Word, and that they may see God’s glory and be a witness to the world (John 17:1-26). Today, Jesus still is our high priest at the Father’s side, interceding for God’s people:

“Christ Jesus, who died — more than that, who was raised to life — is at the right hand of God and is also interceding for us.” (Romans 8:34) 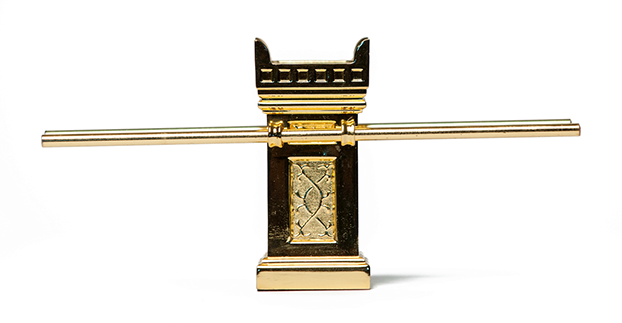 Since we have been forgiven of our sins through the blood of Christ, we also come boldly in prayer in Jesus’ name. When we pray in Jesus’ name, we are praying based on the work He has done and not on our own merit. It is in His powerful name that we are saved and baptized, and in His name we live, speak and act.

The horns of the golden altar were sprinkled with blood from the animal sacrifice to cleanse and purify it from the sins of the Israelites (Leviticus 4:7, 16:18). Just as the horns on the brazen altar represent the power of Christ’s blood to forgive sins, the horns on golden altar signify the power of His blood in prayer as we confess our sins and ask for His forgiveness.

And the prayer offered in faith will make the sick person well; the Lord will raise him up. If he has sinned, he will be forgiven. Therefore confess your sins to each other and pray for each other so that you may be healed. The prayer of a righteous man is powerful and effective.” (James 5:15-16)

Next: The Holy of Holies and the Veil >>